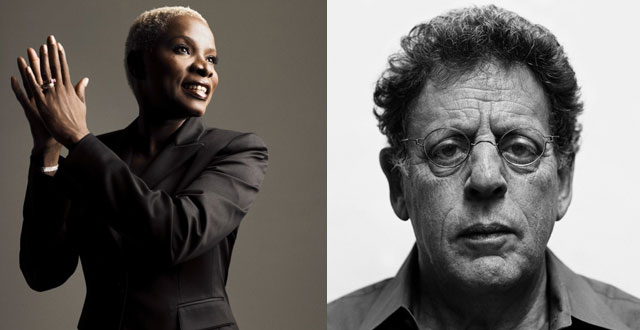 Singer-songwriter Angélique Kidjo will participate in the American orchestral debut of Ifé: Three Yorùbá Songs, her collaboration with renowned composer Philip Glass, on July 10 with the San Francisco Symphony.

Kidjo, a two-time Grammy Award winner, a longtime UNICEF goodwill ambassador and a recipient of the Crystal Award from the World Economic Forum, is an activist for the French-speaking African nation of Benin. For this special performance, she partnered with Glass, an American composer who is considered one of the most influential music makers of the late 20th century and three of his film scores have been nominated for Academy Awards.

Ifé: Three Yorùbá Songs arrives in San Francisco at Davies Symphony Hall following its world premiere with the Philharmonie Luxembourg. Tickets for the July 10 show are still available for purchase.

In advance of the performance, we asked Angélique Kidjo about the message of the orchestral piece, how she initiated the collaboration with Philip Glass, and what about San Francisco inspires her.

What is the message from the Yorùbá kingdom story and why did you choose it for the upcoming performance?

One of the most common misconceptions about the African continent is that its culture is primitive. In fact we have a very complex culture. I knew Philip was interested in different mythologies, so I chose the myths of the creation of the earth according to the Yorubas, which contain fabulous and colorful stories not unlike the ancient Greek legends. My mother was Yoruba and she told me many of the beautiful stories on which the three poems I wrote for Philip are based. One is about Olodumare, the god who created the earth with the help of Obatala and Oduduwa. The second one tells the story of Yemandja (the goddess of the sea who is also so popular in Brazil) and how she turned into the sea. The last one is about Oshumare, the rainbow snake that holds the earth as he bites his own tail.

How did you first initiate your collaboration with Phillip Glass and what have you learned from working with him?

I first knew Philip as a friend who was so generous with his time and so passionate about Tibet. When a classical orchestra asked me if there was a contemporary composer I was interested in working with, I only had one answer! I have to say that I’ve learned so much from this collaboration. As I didn’t write the melodies, I had to learn a new musical language, with scales I would never use in my music and also new rhythms. In Africa most of the rhythms are 4/4 or 12/8, but Philip created for me complex combinations of different meters–something that is unthinkable for an African artist. That was a challenge but I loved it.

What about San Francisco inspires you?

I love the spirit of San Francisco! People are so culturally open-minded, they are ready to open their hearts to different cultures. They have an amazing tradition of social and musical experimentation. This is no doubt why the San Francisco Symphony was the first orchestra in the US that committed to performing this beautiful music with me. I was singing in San Francisco on the day before the Grammys this year and you brought me luck as I won the next day! So I’m coming back to you with some new music no one has ever heard in this country!