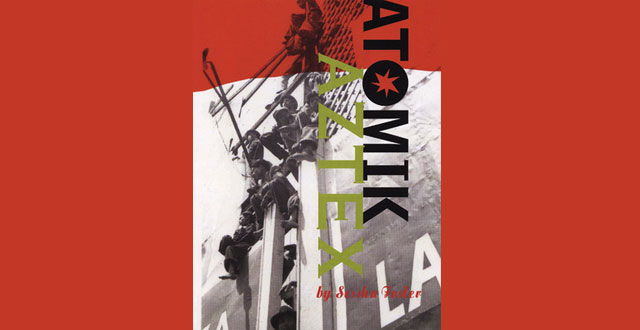 Swimming Through the Omniverse
by Scott Esposito

In Sesshu Foster’s explosive new novel Atomik Aztex, we get two narratives for the price of one. In the first (or maybe it’s the second, part of the delight of Foster’s book is that it’s impossible to tell), the Aztecs not only beat back the Spanish conquistadors, but then went so far as to colonize Europe itself (using Nazi aggression in World War II as a rationale). In this narrative, we follow the first person adventures of Zenzontli, a Schwarzeneggeresque Aztec commando, as he kicks some ass at Stalingrad.

The other narrative finds the very same Zenzontli a lowly illegal immigrant slicing up pigs for a living at a Farmer John slaughterhouse in East L.A. It’s difficult to tell, but it appears that this part of the book takes place roughly in our world (“Disneylandia”, Foster calls it), circa 2005. Zenzontli, equally known for his prowess at slicing hog throats and evading the grasp of the foreman, has been recruited to get the entire slaughterhouse signed on to a petition to unionize the work force.

Combine these two narratives with other, smaller narrative strands that tangentially connect to the main ones — all of which Forster jumps back and forth with little warning — and Atomik Aztex is a pretty intense read. But what makes things even more confusing is Foster’s language, a rabid postmodern pastiche that all but leaps off the page. For instance, in typical ranting fashion Zenzontli, showing signs of both Thomas Pynchon and DonDeLillo, tells us

“You know, you are lucky you are reading this Codex instead of some other horseshit Propaganda like those written by Nazis, urbane closet fascists, the Black Hand Christian fundamentalists, Brown Shirts, wankers, weed-whackers, Victimologists, apologists, tobacconists, Sinologists, herpetologists, hack screenwriters, boxing promoters, after-hours bouncers, market analysts, teknocrats, middle managers, desk jockeys, Democrats, Republicrips, Nixon aides, patty-cake players, Cabinet ministers, Scandal mongers, White House reporters, Cokie Roberts, Norman Schwartzkopf, Bebe Rebozo, the Warren Commission, Dean Martin, Frank Sinatra, Sammy Davis, Hr., and all the other world famous intellects and analysts of out time. Instead of their lies, falsehood, half-truths and self-deceptions, you are receiving the unannointed Truth and the unalloyed facts of someone who was there.”

It’s my guess (although it’s just a guess) that this quote is from the Stalingrad portion of the book, but if I’m right then this raises a good question: how is it that an Aztec warrior from 1942 in an alternative reality has knowledge of terms like “Nixon aides” and “the Warren Commission”? After all, 1942 predates the Nixon presidency and the Kennedy assassination by decades, and that’s not to mention the little matter of the Stalingrad segments supposedly taking place in a different universe from the one in which those things exist.

The short answer to this is that it’s all part of the “ever-expanding omniverse”, more or less the constituent parts of all possible universes swimming amongst each other. In Foster’s book, separate realities can mix, match, conjoin, and separate, leading to some decidedly confusing situations.

The longer answer to this question is that Atomik Aztex runs on Aztec time, which is to say circularly. A protagonist in 1942 could know about events of the 1960s because, in a sense, they’ve already happened. In fact, they’re still going on — whoever said time is God’s way of preventing everything from happening all at once obviously didn’t read Atomik Aztex. Perhaps this quandary is best described by Foster himself, who, in calling his narration “78 rpm realities”, perfectly sums up the feel of several narratives that don’t run parallel so much as spiral madly like tangled Slinkys.

Comparing Foster’s book to spinning records is apt in another way, as Zenzontli’s narration often smashes together wildly divergent things, creating a culturally flat world. For instance, here’s Zenzontli’s description of why the Aztecs defeated the Spanish:

“Cuz in no way does that fit our aesthetic conception of how the universe is supposed to run. It’s just plain ugly. To think that they want to foist that vision of Reality on the rest of us. That’s the insult. Barbarik, cheap aesthetik based on flimsy Mechanistik notions of the omniverse as a Swiss watch set to ticking by some sort of Trinity. The Spanish believed they had superior firepower with their gunpowder, blunderbusses, crossbows with metal darts, steel body armor, Arabian horses, galleons built in Cadiz. All that wuz true. But we Aztex had our ways and means. We have access to the meanest nastiest psycho Gods through voodoo, jump blues human sacrifice, proletarian vanguard parties, Angry Coffeehouse Poetry, fantasy life intensified thru masturbation & comic books, plus all out armies, Flower Warriors, Jaguar Legions, Eagle Elite Units, Jiu Jitsu and of course the secret weapon.”

Notice how Zenzontli freely blends contemporary concepts (omniverse, poetry slams) with far older ideas (the “Swiss watch” theory of the universe, Marxian revolution). Everything — whether new or old, scientific or artistic, biological or mechanical — is tossed together, cemented by a frenzied narration that doesn’t allow time to stop and ponder the juxtapositions. It all just exists together at once, a chaotic mix of information free from temporal, physical, or mental boundaries.

It’s a vision of reality that, if not necessarily new, is rarely expressed with this much energy and creativity. “Reality is infinite,” writes Foster at one point; later he says “The world goes on & on. It will never stop”, and Atomik Aztex is written as though to demonstrate these assertions to the fullest. Nothing, no plot twist, characterization, description, action, or thought, impedes Zenzontli’s rabid narration, and if by the end you feel drowned under a torrent of words, well, then Foster has done his job right.